A tale of two plates 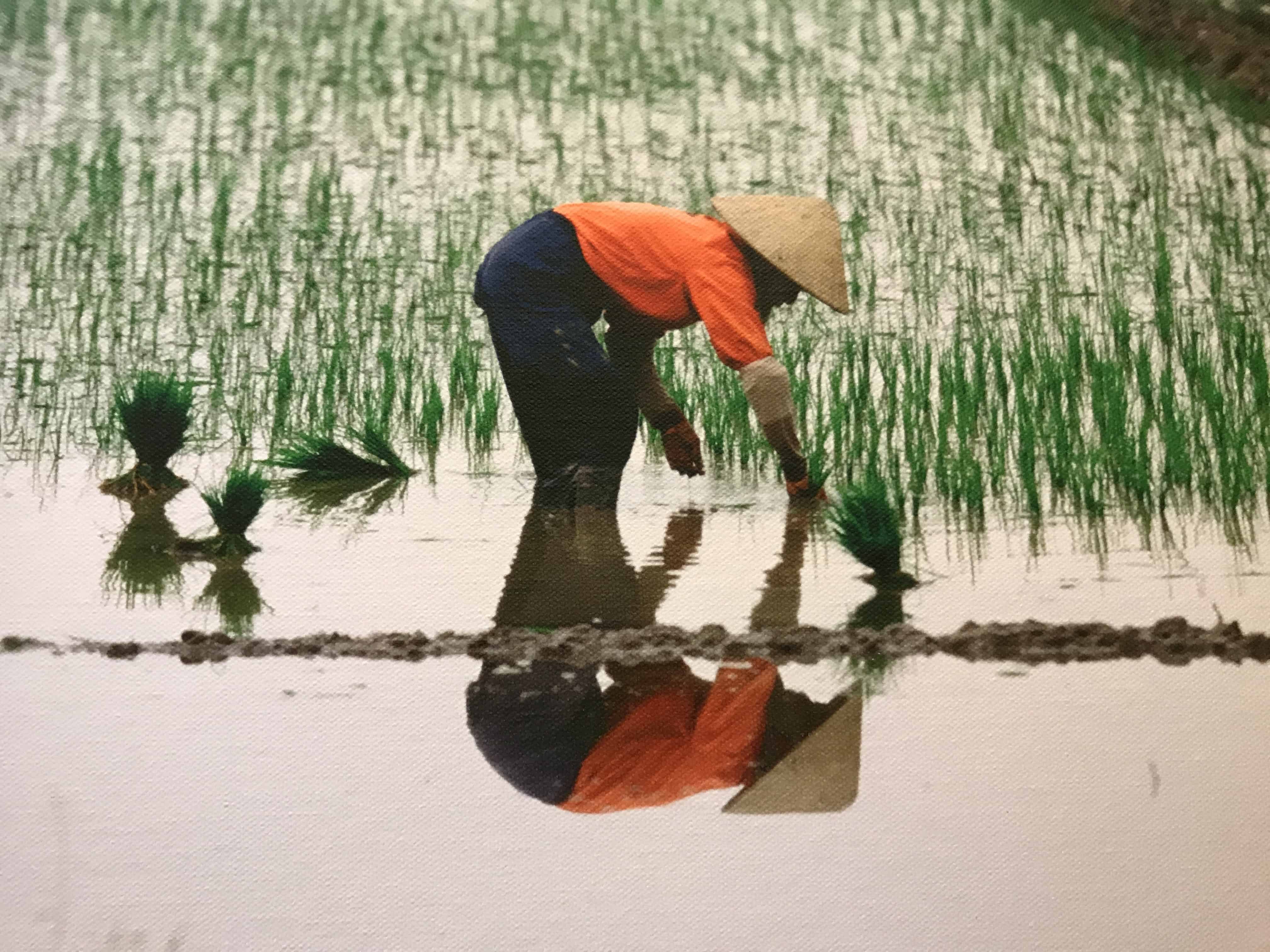 A tale of two plates

It’s funny when I started traveling I wasn’t sure what to expect. As the days and countries zipped by, I couldn’t help but think? I was thinking about food, not the fact I was eating too much of it but about food. How profound, but in its simplest form after water and before the environment it’s the most important thing for now and ever after for human survival. I learned how water, food and the environment are intrinsically linked together.

What was the world eating or for nearly 500 million hungry people not eating. What are over 1 billion people eating too much of and killing themselves with? How secure is our food system, what will we be eating in 50 years’ time. How will we feed the 9 billion people in 2050, 4 of which will be my own children? Actually hopefully 5 including our next arrival!!

I discovered the hard realities of climate change are impacting on our food system throughout the world. Driving back through the brown fields of Wicklow hammered that message home.

I even went to a lecture where intellectual boffins hypostasised and crossed intellectual swords on who had a more factual portrayal for the destiny of humanity and food. It was hard to make sense of it because it’s easy hypothesise and dissect problems but where are the solutions? I often find these debates interesting because they never speak the language of those they wish to influence or even listen to their opinions.

So what are my observations about food? I know I ate too much of it and have the belly to prove it? It is because my plate is full and I can have whatever I desire. Eating for me is not about survival it never really has been. I live in an age of plenty and my diet is based around emotions?

Emotions? Yes because the food on my plate and any decisions to eat it are heavily influenced long before it hits my lips not to mind my hips. In the western world food has become about emotions. In simple terms food stories, this can be anything from health, ethical, taste, love etc..

I am going to oversimplify it even more in my experience people are eating from two plates. One plate is that of plenty with an emotional connection whatever that maybe. The second plate is cheap and safe. For those choosing plate number two they want firstly to know they can afford it and it’s safe to eat. If they can enjoy the taste and eating experience great, but this is just an added bonus. It can be easily argued there is a third who are happy to have any food on their plate (sadly this is much deeper and sadder problem).

Now you must remember in 44 days and over 100 farm visits I had seen a lot of farming and food. I am now more in awe than ever about how food is produced. But…… a lot of people don’t care or just don’t know about food anymore. Education will be key to solve this problem on so many levels. I think we currently take for granted that food on either plate!

For now I want to stick to the story of food.

While at one business the false synthetic burger (meat grown in a lab) was mentioned. It was rubbished as something that might never happen. The more I thought however the more I think it will be a very real reality in the future. I thought about the science the unknown proteins, manufacturing costs etc. then I stopped does it matter? What will matter is the story (emotions), safety or the price.

It will be the safe animal alternative or it will be cheap clean and safe alternative. It will have a space on either plate but it will depend on the story being right? I do feel intensive livestock production will have a competitor from synthetic biology. How much they will compete I don’t know because with an exploding population there will be a huge demand for animal protein or fake animal protein.  Maybe they will co-exist who knows but I do feel they will compete for the cheap safe plate?

The food businesses that I saw that were most successful and endearing had the best stories. They connected emotionally with people, those that didn’t also had a story and that was they were cheap and safe. I also met with what some people would describe as intensive systems with fantastic stories.

As I travelled I felt a little disheartened because we are losing control of the food story particularly the primary producers of food. A generation will grow up and eat what they’re smart phone screens will tell them about it. Even the humble carrot has a great story, but the large retailers only want a certain type of carrot packed cheaply uniformly in plastic. When in fact it needs certain soils, planting, caring for, harvesting and processing. It’s just ruined in my opinion wrapped in plastic with its friends for 99 cents!!! That soft plastic that is often not recyclable and ends up in…

Of course there is more factors than the story or emotions in our eating habits but I found the stories we are told heavily influence our thinking. I’m not denying taste doesn’t heavily influence our decisions etc. however I really noticed how food stories could influence the success of certain brands. It could be argued that taste even is conjured from a past emotional experience with the foods we eat. For example I love the taste of bacon and cabbage but it is also evoked by fond memories around our kitchen table in Kerry as a child.

This made me think about Irelands ability to produce and sell (influence people emotionally) food. Should we be playing in the global commodity market cheap and safe? If we are we need to do it well because it’s a hard volatile world, heavily influenced by weather, markets and supply. Or should we be connecting emotionally with people and selling Ireland the story.

People are shouting at me…. we already are? Yes there is so much we do that I am so proud of as someone who work in Irish Ag. One fear I have is a story must stack up and it must be consistent. If not you will lose the trust of those listening. Once trust is lost it is hard regained. We have the ingredients for a great story, great produce, passionate farmers and a picturesque countryside to farm in? I even met a colourful master butcher in Germany, who said there was “no beef like Irish beef”.

I am increasingly concerned over the expansion route in dairying and what that could be doing. My personal opinion is we should build our dairy industry around the cow? My own personal topic is to understand the cow better. What are her biological needs how can human and environmental interactions affect her ability to produce? What about a dairy industry the cow wants, build it and tell the people.  If we are going down the commodity route and trading on price alone then we must be very clear about our messaging. No false promises? In that model it is all about costs and subject to the external pressures. This is not a system ideal for cows or those farming them in my opinion. Ultimately I know that any food production system is dependent on markets but I do feel there is a market for that approach.

Interestingly our sheep and beef industries also have great stories. The beef better told than the sheep I feel. Something I know at a local level sheep farmers are eager to correct. In simple terms lamb is tasty and healthy. Fed on green and lean lamb produced by family farms from dingle to Donegal.

What are the hot food stories? Anything green and clean. Urban food production, hydroponics all growing markets. Anything grown with love and passion seems to do well? This is the reality of how food sells make it sexy!. I joke…it is about emotion and we must connect with people. My experience is the family farm has a unique advantage here. It is the harmony between generations and the land that when done right can be powerful.

I’m probably rattling cages etc., but if you’re going to have an opinion have a productive one. Don’t blame, shame or keep doing the same. Let’s recognise the importance of food stories. Let’s not take our customers for granted. Step into the consumers shoes and let’s not label people vegan nuts or fussy millennials. We heard much about veganism, I believe militant vegans are more cult like and doing no one any real justice in fact their cause, may be more deep rooted than animal welfare alone? I actually met quiet a sound well-argued vegan on my travels, lets beware we eat with our emotions and if we want people to eat our produce lets tell a good story. No actually let’s tell a real story and shout about it. Then let people make a choice remember in our market it will most likely be an emotional one or a price one?

One last thing I ask farmers is not to complain about consumers, they are listening to stories. So we must influence them, however the further you are from the consumer the less control you have of the story? I love the direct selling model I even tried to set up a food internet platform in the last 5 years (it didn’t work). I’m sure somebody will crack it?

We can’t all sell from our yards that often require huge logistics, investments and access to market. We are though in the vast majority supplying into a commodity market. There is no reason Ireland can’t be the artisan producer of commodities even. We have a chance to tell a wonderful story let’s get it right? Imagine opening the fridge of your consumer and feeling what they feel?

This might be highlighting the problem about who now tells the food story? There are a number of large supermarkets in Europe that dominate the market place. They decide what the consumer wants? They listen to the consumer because they know it pays to listen. They control the messaging of food, is this right? Schools should probably be the place where the story of food begins, maybe told by those who produce it?

For now these are just some of my early thoughts and observations. I owe so much to Nuffield for giving me this opportunity to think and challenge myself. I am no expert but I do feel compelled to discuss them because my young family will grow up into this food ecosystem that is more finely balanced than ever. It will take leadership, debate and most importantly innovative solutions to ensure their future is a happy healthy one.